How Not To Camp In The Florida Swamp


Once upon a time, two 18 year old fools decided to camp in Tampa’s Lettuce Lake Park while having never camped in the wild a day in their lives. No amount of discouragement from family and friends could deter them. So the two fools arrived at the park giddy with excitement over what they thought would be an amazing adventure.

One of those fools was me. Yep, just look at me in this photo, grinning like the Cheshire cat as if what we were doing wasn’t insane.


Right after high school graduation, my then best friend and I decided to go on an adventurous camping trip. We thought we had it all planned out with her mother's help. We bought this; we bought that. We rented this; we rented that. When the time came, we showed up at Lettuce Lake park at closing as instructed. We went over to the booth to pick up the canoe we’d rented. The attendant there asked about our plans.

“We’re going to canoe up river and camp,” we beamed.

He laughed then showed us to our canoe. In all of our delight, we did not marinate on his suspicious laugh. Yes, it was suspicious. What the hell was he laughing about? We would discover just what a little later on…

We loaded up our canoe with all that we’d brought with us. I wish I had photos to show you what that canoe looked like once we were completely in the water. Ha! There was so much gear and food in it that the top of the canoe was not far above the water. We paid it no mind, jumped into the canoe and began to glide away from the shore. My friend’s mother took pictures and waved to us all the while smiling with delight. I sometimes wonder if she secretly wanted us dead… Nah, she was just helping young fools do foolish things… 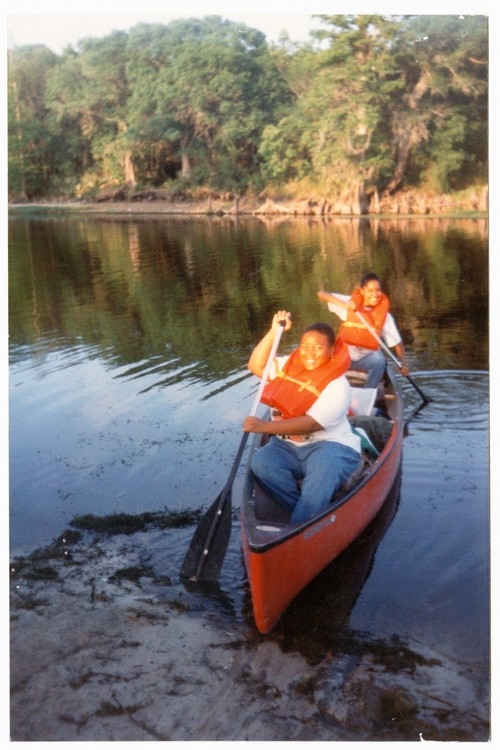 With our canoe gliding along effortlessly, it was time to execute our plan… *Silence* … you hear those crickets too? We had no plan. Never fear, we were quick on our feet. We just looked around at the many different directions we could take and picked one. Thinking back, we picked the darkest, narrowest, most ridiculous channel we could have picked… And did I mention we arrived at closing so it was getting dark?

We headed down that narrow channel ooohing and ahhhhing over eagles, turtles and other critters while looking for a place to camp. We came upon an inlet that looked promising only to a fool’s eyes. We prepared to get our canoe into the inlet when I casually said to my friend “There are a lot of water moccasins right here. Maybe this isn’t a good idea,”. Oh, that was the understatement of the year. The inlet and the low lying tree branches over the water were drenched with water moccasins. Were they having a meeting about the new intruders (us)?

We wisely (I use this term loosely), backed out of the inlet and started down the narrow channel again. A channel that got more and more narrow as we went. We were about another 20 minutes in when I noticed a familiar pair of eyes sticking up out of the water. They slowly turned and began to float forward toward the canoe. At that moment, we started to realize we might have been fools, maybe even a little dumb. We weren’t flat out dumb just yet…

With fear in her voice, my friend said we had to get out of the channel. There was only one problem… the channel was so narrow, we couldn’t turn the canoe around. The gator kept coming toward us as we rowed backwards as fast as we could. When we reached the inlet, we were able to turn the canoe around and head back toward the park. By the time we emerged from the narrow channel it was pitch black and my friend was starting to panic.

There is no blackness like the blackness of the wild….

I had never in my life experienced the level of blackness that fell upon us as we were rowing back to the park. Our lanterns were on but barely useful and our eyes made no adjustments to the blackness. Honestly, I have NO idea how we made it back to shore. I don’t recall if we just rowed ashore blind or if we eventually saw the shoreline. I’d like to think we eventually saw it because we managed to pitch a tent afterward. There must have been light other than our lanterns yet not enough to prevent us from reaching full “dumb” once we got ashore.

You now you’re dumb when…. you book it from a gator coming for you in a narrow channel, only to miraculously make it to shore and pitch a tent not 100 feet from the water.

Let that sink in.

When we woke up the next morning, we were shocked we’d pitched our tent not 100 feet from the water. We looked at our tent then looked at the water. “That was dumb as hell,” I said. She agreed. By this time it was Saturday morning and visitors were starting to arrive at the park. We obviously should have camped at the park instead of trying to go up river. Lesson learned.

Nevertheless, it was a beautiful day so we ate breakfast and hung around to people watch for a bit. When we got up the nerve, we pushed our canoe back into the water and headed down a wider section of the river in the opposite direction we’d gone the night before. However, it wasn’t long before the gators came…  At first it was one or two and then there were more and more. I tried to relax about them but the closer they came to our canoe, the more nervous I became as did my friend.

Eventually we decided to turn around and go in the other direction while we carried on about our ordeal the night before and how foolish we were for thinking we could canoe up river when there was nothing up river but swamp. I also revisited the attendant’s laugh the evening before and offered a few choice words into the wind for him.

As we glided along, we approached a long boardwalk full of people out for a stroll in the park. Near this boardwalk was another inlet. In that inlet were two women sitting quietly in their canoe. They were trapped; surrounded by large alligators. Those two women had nerves of steel. I was filled with anxiety about it and it wasn’t even me sitting there.

As other visitors pointed and shook their heads in pity at them, a large gator jumped up out of the water with a fish in its mouth. I’ve never know gators to do this (this was long before the Crocodile Hunter). It felt a bit unreal and well… dramatic. But maybe that was the point. Other gators were going underneath canoes and swimming close enough to the surface for the canoes to rumble over their backs.

After seeing the rumble scare for the third time, I couldn’t take it anymore. My anxiety was off the charts. I couldn’t even enjoy the adventure anymore because I was scared to death. I was relieved when my friend suggested we get off the river. She couldn’t take the mini heart-attacks either. We drug the canoe out of the water and relaxed at the tent that we still hadn’t moved. After about an hour, the two women were able to safely row out of the inlet and while the gators continued to show us who’s boss that day, there were no incidences.

- my friend after a stressful few hours on the water -


My friend and I reflected on what we’d done (for years to come as a matter of fact). We could clearly see how foolish our plan was and that we’d put little thought into anything outside of getting gear and making the reservation for the park and canoe. This “adventure” may be the reason why I’m obsessed with planning and safety today. I often look back on this story, see how it could have gone tragically wrong and I continue to learn from it.

It also made me realize the benefits of taking your kids camping as they are growing up. They can learn to be smarter sooner. We were required to go to an outdoor training camp in 6th grade but I think kids need repeated exposure. Prior to our trip, we had no real camping experience other than camping out in her backyard. Somehow, I don’t think fighting off palmetto bugs under the tree in her backyard quite prepared us for our first expedition into the swamps of Florida.

So, some final words …

For the guy who laughed and didn’t warn two 18 year olds of their impending doom… “That was some dirty shit, my friend.”

And to the rest of you… “Look out for fools on the move. They may not know any better.”

Do you have a fool’s tale to tell about one of your adventures?