How To Make Amazing Organic Craft Supplies To Sell


When you are traveling or living on the road full time, you have to be a little creative about generating income to sustain your lifestyle. Who says it has to be boring?

Making and selling organic crafts and craft supplies can be very affordable, fun and green.

Take for example the year I quit my job and lost almost everything... before you feel some type of way about it, know that it was the best thing that ever happened to me. It was my first real lesson in understanding the meaning of making your own future. That year, not only did I quit the worst, most emotionally abusive job I’d ever had (@ J. P. Morgan Chase), I had to move out of a rental home I loved in a neighborhood I loved. I also had to sell almost everything I owned and ended up staying with the parents of one of my long time friends. To say I was at an all time low would be an understatement. I had never been in such a situation and had never depended on anyone like that in my adult life.

It took more than a year for me to return to another corporate job. So what did I do during that time?

I re-invented myself again and again.

I continued to sell my possessions which lead me to fully embrace minimalism (what a release). I also thought of fun, economical ways to generate income. Fortunately, I had to look no further than my friend’s parent’s backyard.

So, I was sitting out by the pool (hey, I didn’t say I was living rough while I was down and out. hahahaha) and I noticed a lot of orange palm seeds lying in the grass under the palm trees in the yard. I wondered if there was anything I could do with them. So I did an internet search to find out. For the most part, I only found sites that talked about cleaning the seeds and selling them to nurseries. Well, that’s a great idea actually….

But that’s not what I did.

I did clean the seeds but I had another idea. Instead of selling the seeds to nurseries, I decided I could clean them and sell them as organic craft supplies. I thought they would make beautiful necklaces, earrings, pendants, belts, etc. So I got to it….

STEP 1: Gathering and fermenting the seeds

The first step to getting at the cute little mini-coconuts beneath the orange pulp is fermenting the seeds. Fermenting them is an easy, yet lengthy, process. I collected the fallen seeds in 5 gallon buckets and added water. I would recommend adding a fine mesh over the buckets to keep out insects (especially precious little bees) or put them in a location where insects won’t get to them. 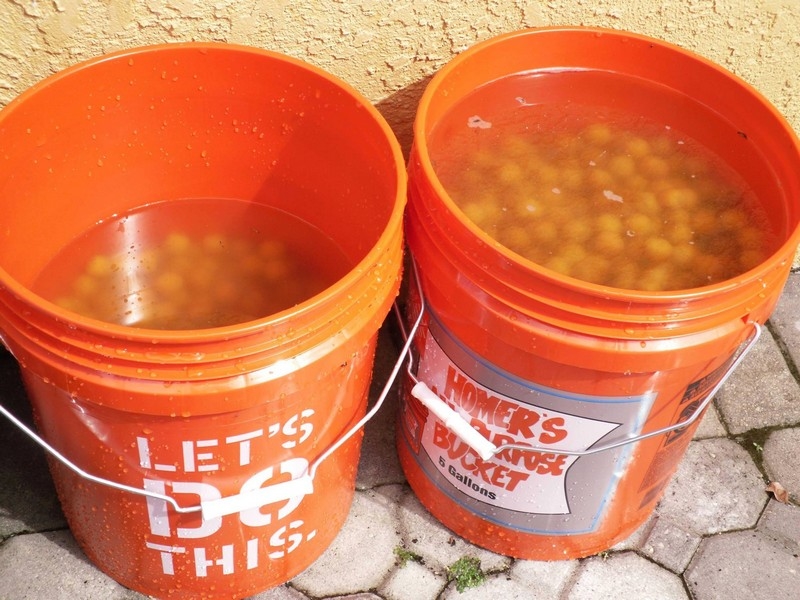 Let the seeds sit in water for weeks and weeks. Stir them every so often to make sure they are all fermenting well. Eventually each bucket will get frothy on top and start to smell like some kind of beer. 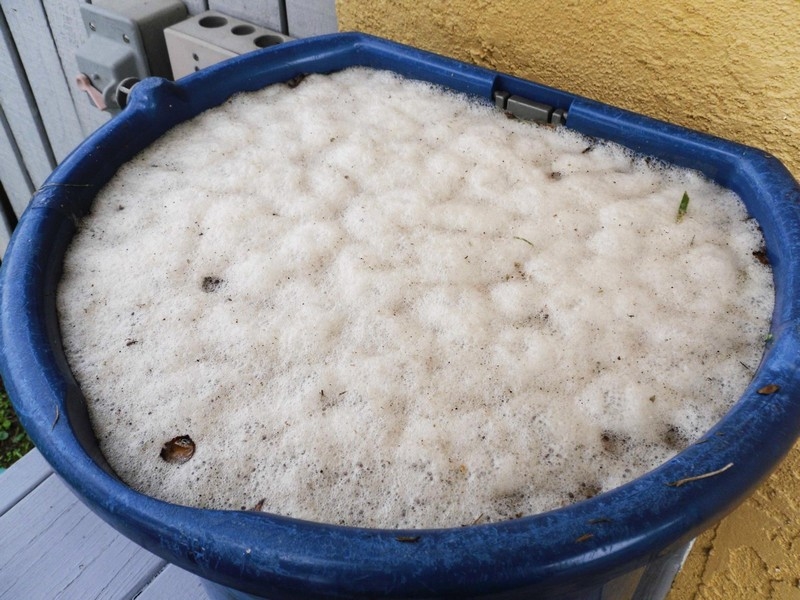 When the pulp is very very soft, its time to remove it. To remove the pulp, I used a power drill with a drill bit extension and a wire wheel on the end. I stuck the wire wheel into each bucket and turned the drill on high. It took some time but eventually all of the pulp was removed from the seeds. However, it doesn't remove all of the coir. 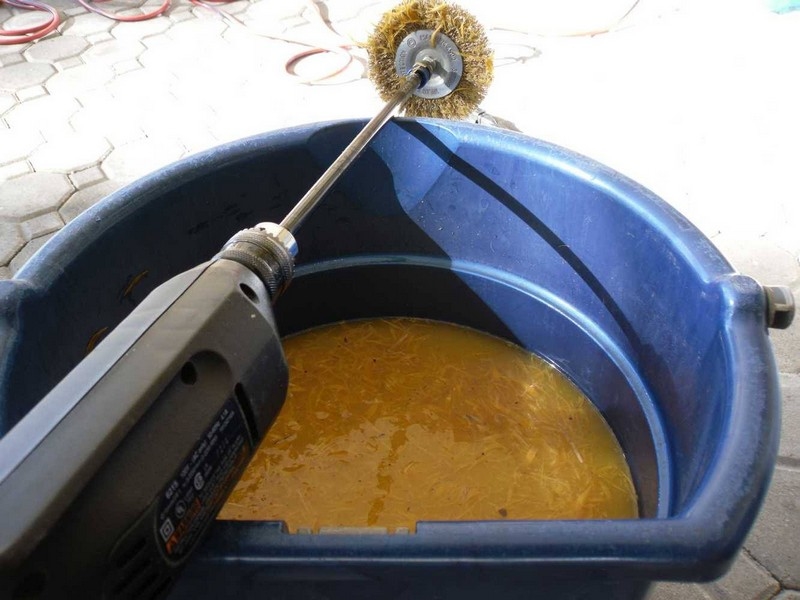 You can pour the sludge out around the trees or any place that could benefit from it. Hold on to any coir that is floating around in there. It turned out to be a very useful bonus byproduct of the process. 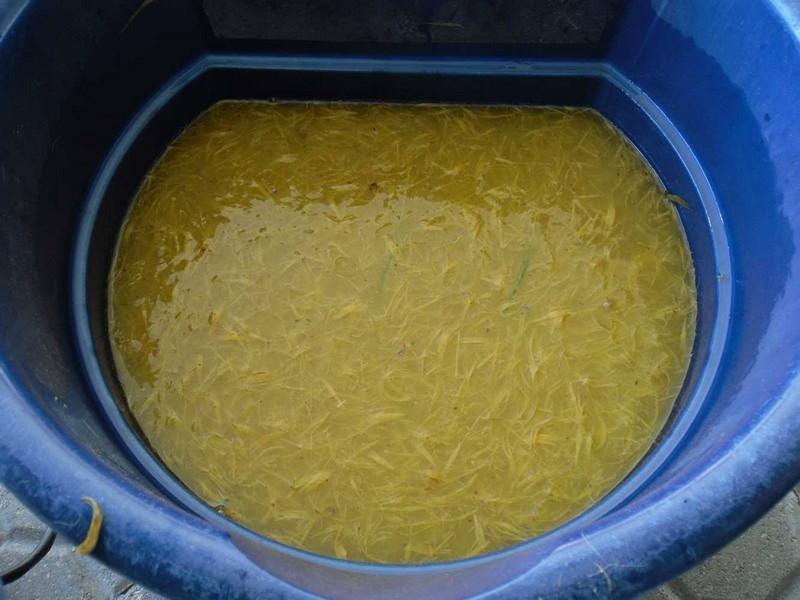 I learned the seeds needed to be dried out. People who clean palm seeds to sell to nurseries dry them before selling them. So I placed them on dehydrator trays and dried them for hours. 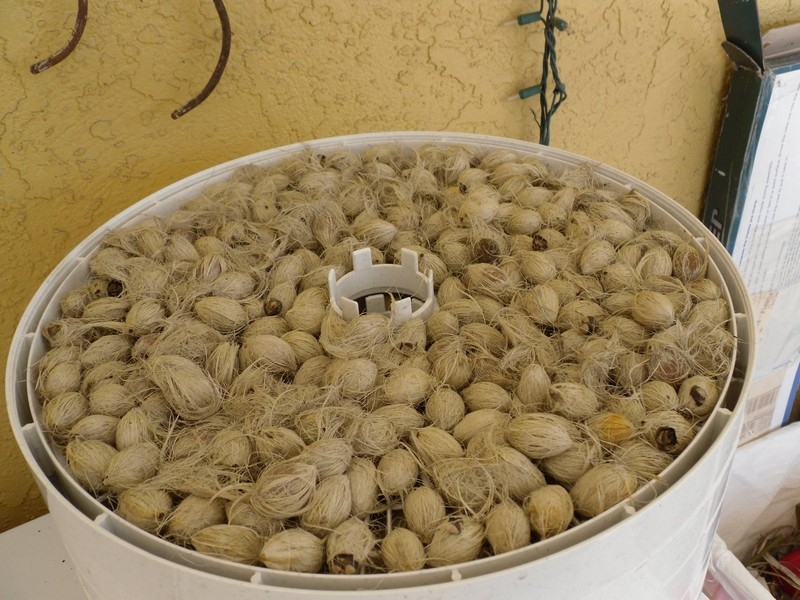 What’s coir? It’s the same fibrous “hairs” you find on big coconuts. I decided to keep the coir and dry it out. I placed it on dehydrator trays and made sure it was completely dried. The coir could be packaged and sold as fire starter for use while camping. When dried out, it burned very well as a fire starter. It reminded me of the dried dead bits of Spanish Moss we used to start a fire for our lunch when I went to Nature’s Classroom in sixth grade. 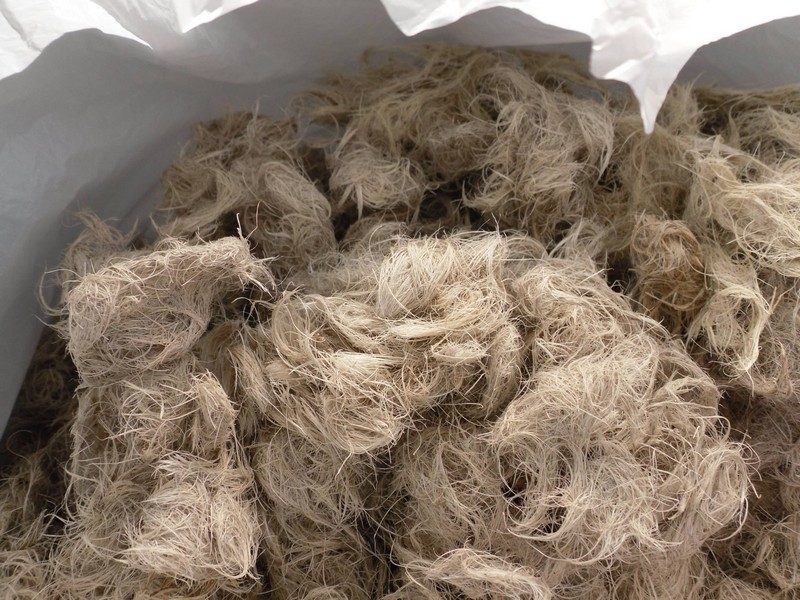 I wanted to polish large batches of seeds but didn't want to buy an expensive rock tumbler so naturally I built my own. I removed a working motor from a broken clothes dryer. I bought an electrical cable with a plug on one end and nothing on the other. I stripped the plastic off the end without the plug and connected it to the two power wires coming out of the motor. 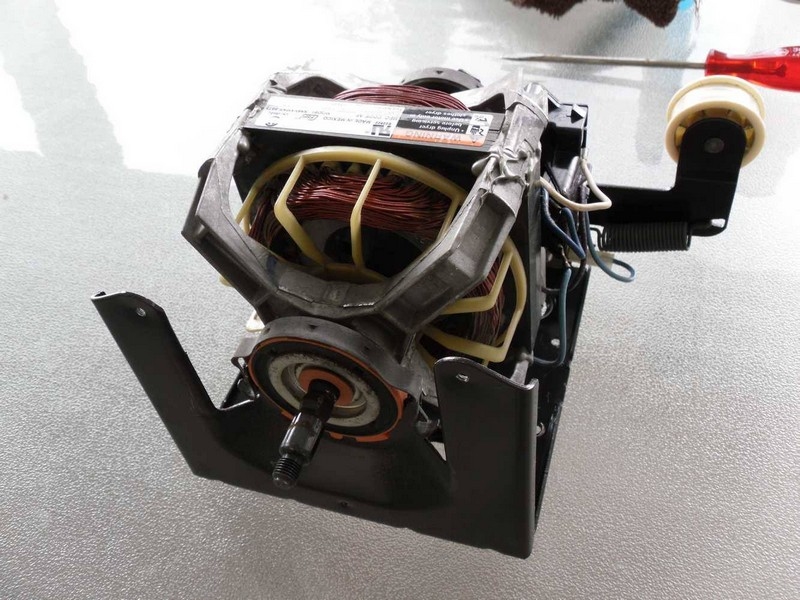 I bought a short piece of plywood and on the bottom, I glued on a yoga mat to protect the floor, keep the platform from moving and absorb the vibrations. On the other side, I mounted two solid pieces of wood with notches cut out for the 5 gallon bucket. I added in-line skate wheels that I took off of skates I got for $6 at a thrift store. The wheels were put on with long bolts, nuts and washers. The bolts, washers and nuts should not interfere with the skate bearings. 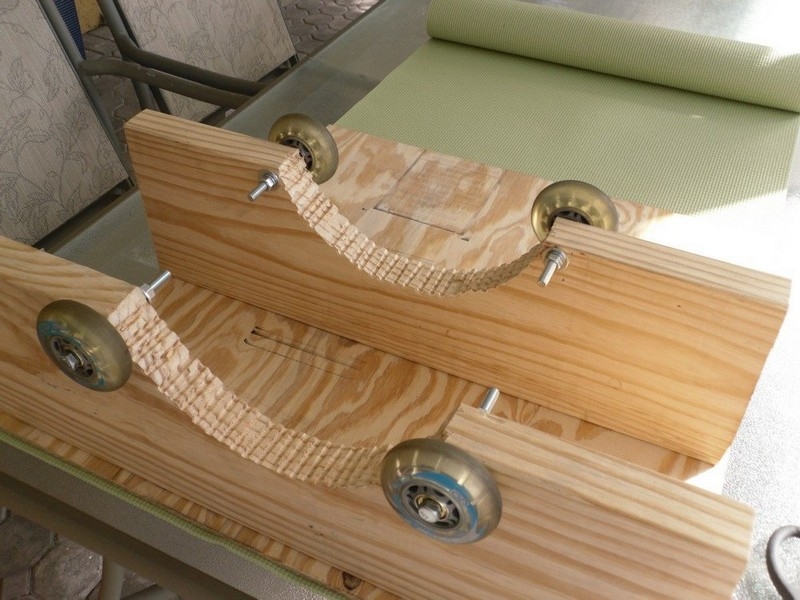 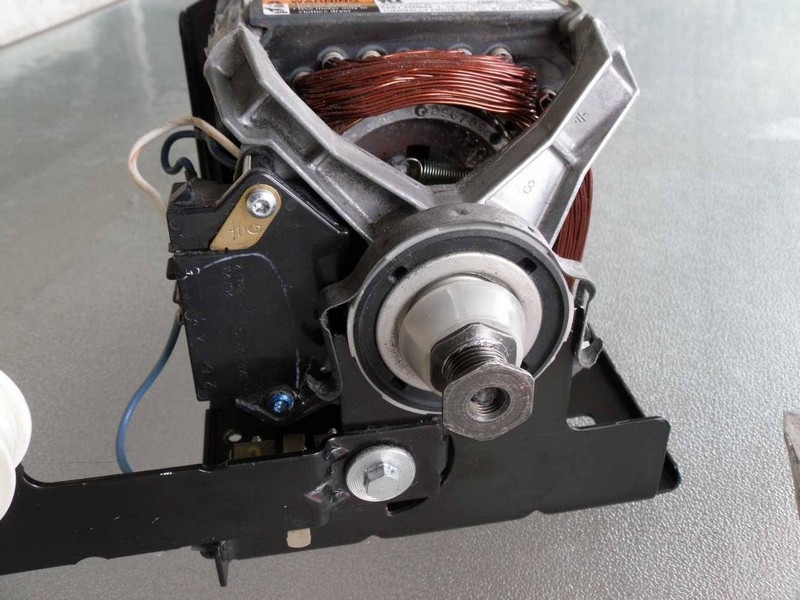 The tumbler worked wonderfully when empty and not too bad when some seeds were added but it did need a little more engineering. Too much weight would quickly make the setup unstable. So it’s not like you would be able to put a ton of items and polishing medium into the bucket to tumble. You still have to be a bit modest about the amount of contents you want to tumble. 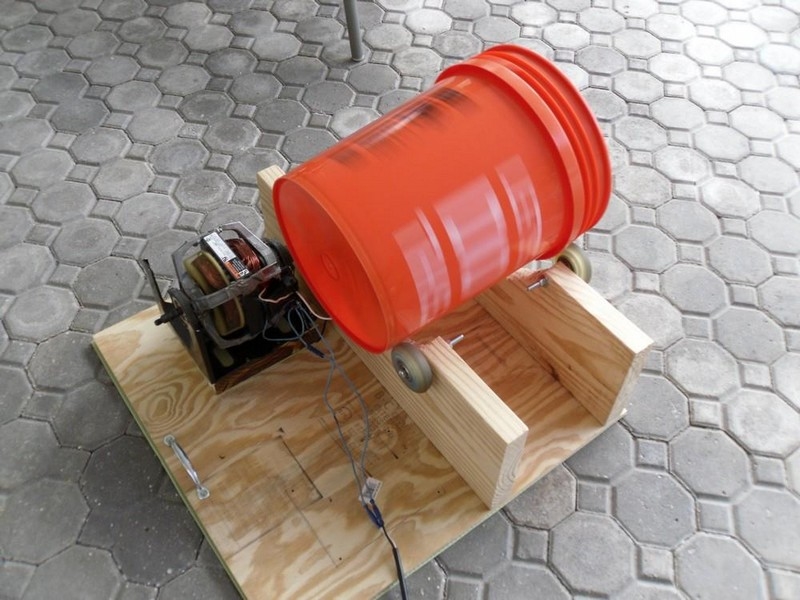 I never got around to using the tumbler to polish seeds. So I went ahead and hand polished several batches to sell. I used large and fine grit sand paper. It was actually super easy and the little seeds were adorable when I was done. They could be used au natural, stained or painted. I did not drill holes into the seeds. 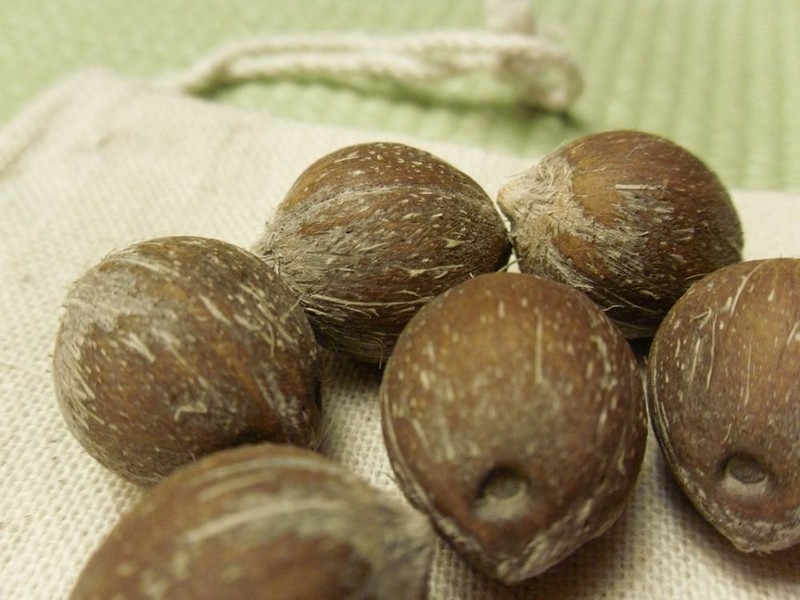 It is up to you, how, when and where you sell the products. I opened an Etsy shop for my natural craft supplies and I had other tree seeds I was selling that needed no processing other than drying out. I would recommend as with any shop, you stick to simple items to sell and you perfect your presentation and customer service. 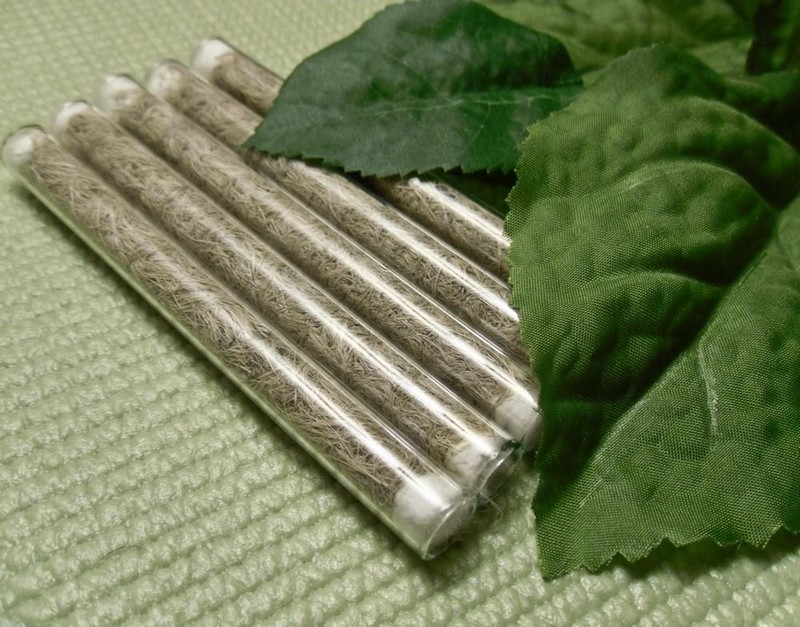 That’s it. I loved that I could use seeds that had fallen naturally off the trees to generate income. Collecting the seeds cost nothing and they would otherwise just rot on the ground in people’s yards. There’s more than enough for you to take but also leave some to rot and infuse the soil or for animals to eat or use. Had I not moved abroad, I would have continued the business. I’m sure not too many people would have turned down an offer to remove palm seeds from their yards at no charge.

I also collected the seeds of a different type of palm tree as well. The seeds were quite different but when dried in a dehydrator and crushed, they would work wonderfully in organic scrubs and soaps. However, one has to be careful about using and selling organic items that will be placed on a person’s skin, etc. I was mainly experimenting with this on myself. 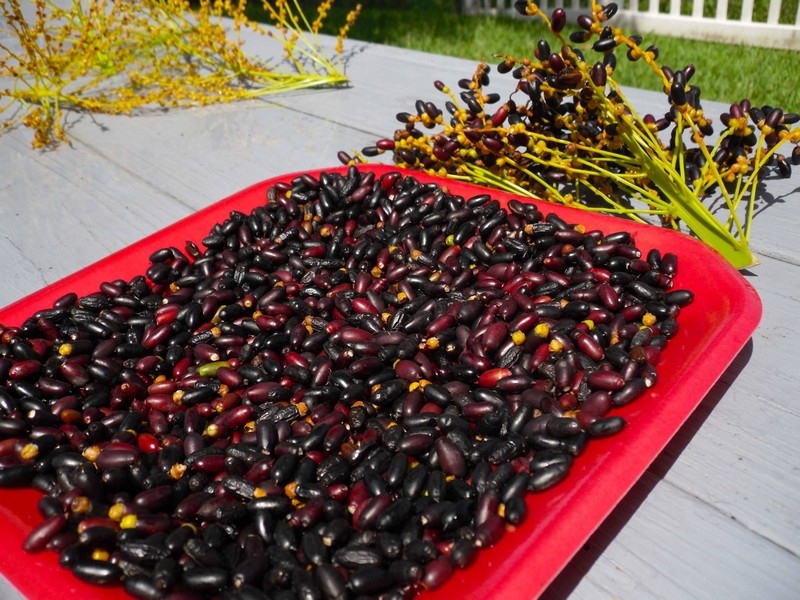 On that note, I would suggest you consider the risks and choose ideas that have the least amount of risk to your customers and yourself. Stay safe and keep others safe.

But think outside of the box and think of ways you can turn the natural processes of nature into a small business.