Moving To South America: What I Should Have Packed


Before I moved to South America I asked "What Should I Pack?". Now that I'm here the question is "What should I have packed?". The answer is everything I liked and everything I wanted to be of good quality. I'm going to give you a run down of what I should have packed. Some of these choices will mimic what others have written while other things are more specific to my tastes. I must also add that honestly, if you can find a way to get your belongings here in as economical fashion as possible, you should do so. I no longer think it's such a great idea to sell everything and repurchase it. You're still spending money regardless. You just have to figure out if it's cheaper to buy everything (of the same quality) again or cheaper to bring it. I personally feel it's cheaper to bring most things that can be easily carried or brought in luggage.

1. Sheets - I'm no sheet connoisseur but folks are right about the sheets here. They are awful. They remind me of "institution" sheets; stiff, poor quality sheets. They pill up in a mere two days.

2. Cooking Utensils - Yes, they have them. There is no shortage and the quality isn't half bad. BUT I found that they are more expensive than in the states with less variety.

3. Pillows - Bring your own or plan to make your own. The pillows here are expensive and are downright terrible. You can get better bed pillows but they will cost you. They don't put enough stuffing in them so they are so soft they provide no support and are unusable as-is. The good news is, if you can sew, the stuffing is super cheap (about $5 for a giant waist-high bag of it) and you can re-stuff a store-bought pillow or make your own.

4. Any kind of BPA free plastic you like - They sell lots and lots and lots of cheap plastic stuff here; sometimes for too much money and I haven't seen anything BPA free. I'm not saying it doesn't exist only that I've yet to see it.

5. Electronics - This has been mentioned over and over again around the webs. You can get electronics here but they are very expensive (especially TVs). However, I find that some electronic things here are way cheaper than the states like Microphones and recording equipment (I can't wait to setup my mini home recording studio here). But phones, computers, tablets, etc. are all very expensive. In addition, the computers are like models from 10 years ago (I may be exaggerating here but not by much). It's not easy finding desktop computers (yep, some of us nerds still love and need them) and the laptops will often not have the kind of resources you can get in the states (like quad core processors). I am told some stores will order parts for you so you can build you own. I believe this is true. I attempted but found I needed a translator so I will have to try again or get my Spanish together faster. As far as brand, they have some US brands and other brands. It's all good in that area.

6. Wifi Router - The one your ISP will setup for you will barely reach past 10-20 feet. They sell better ones here but they may be more expensive than the ones in the states so if you already have one, you might as well bring it. I brought the one I had in the states. I have high speed fiber internet here (for only $40/month) and the wifi router they gave me is some cheap Linksys deal with poor range.

7. Towels - This one gets mentioned a lot too on the webs and once again, they tell no lies. Unless you like washing and drying off with sandpaper, bring lots and lots and lots of towels for your body and dishes. I'm so glad I stocked up and brought my own towels, I don't know what to do. When I got back to the states, I will stock up and bring some more. I also find these terrible towels here to be pricey as well. You'll pay about $7-8 or more for these sandpaper bath towels that will barely wrap around your shoulders.

8. Silverware - Yep, they have them, they are fairly cheap and they "will do" but if you want nice silverware that is also affordable, bring what you have from the States.

9. Deodorant - This probably shouldn't be here but if you can stock up a year or so at a time on deodorant from the states, do so. The only reason I say this is because while you can get the same brands that you can in the States, they come in what I call "play play" sizes. They look like travel sizes but cost about $1 more than the sizes we are used to in the states. I think that could really add up after a while; especially if you are an active person and go through a lot of deodorant (or have teenagers that do).

10. Sewing machine - They are everywhere here and from decent to professional quality, however they are more expensive than in the states. I brought mine with me.

11. Food dehydrator - I haven't seen one yet. I'm sure they have them but I've yet to find one. I would imagine if they did have them, they would be pretty expensive.

12. Glass/Pyrex storage - If you like storing your food items in glass containers, they have fantastic ones here but they are VERY expensive. I just bought one for my butter a few days ago and it cost $14. I'm sure I could have gotten the same glass container in the states for $8 or less.

13. Clothes - If you are short and maybe a size 10-12 or less,you can get clothes here off the rack. Anything other than that, bring lots of clothes or plan to make your own.

14. Bras - I'll be frank... if you have big boobs, bring lots of bras. I'm not saying they don't exist but the largest bust size I've seen thus far here among the natives is maybe a C.

As you can see, this is a bit of a short list. A lot of items here are great. But some stuff is lacking or just downright expensive. So if you already have it and can haul it over, you might as well.

NOTE: If you have several bags, luggages, plastic totes, trunks, etc. you are moving with, get an adjustable dolly. It will save you so much anguish! I would have been suffering had I not brought the RocknRoller Multi-Cart adjustable dolly which held ALL of the luggage I brought. 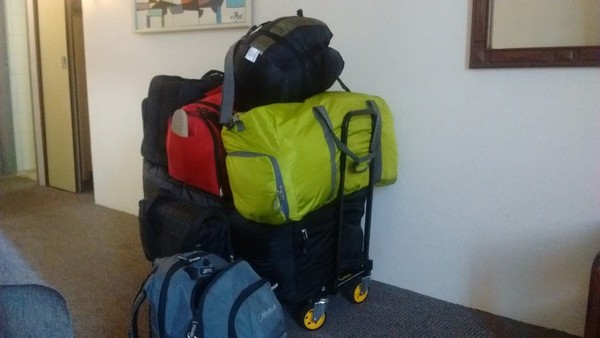