Remember in the movie Romancing the Stone when, romance writer, Joan Wilder went to Cartagena to save her sister and ended up going on a wild adventure for most of the movie?

Well, shockingly, my first port stop in Cartagena was nothing like that. Ha! Romancing the Stone is one of my favorite movies and was probably a tad bit responsible for my stint as a romance writer and adventure seeker. However, when we pulled into the port in Cartagena, I didn't jump off the ship and go on a wild adventure that ended in romance and riches. As a matter of fact, I didn't get off the ship at all. 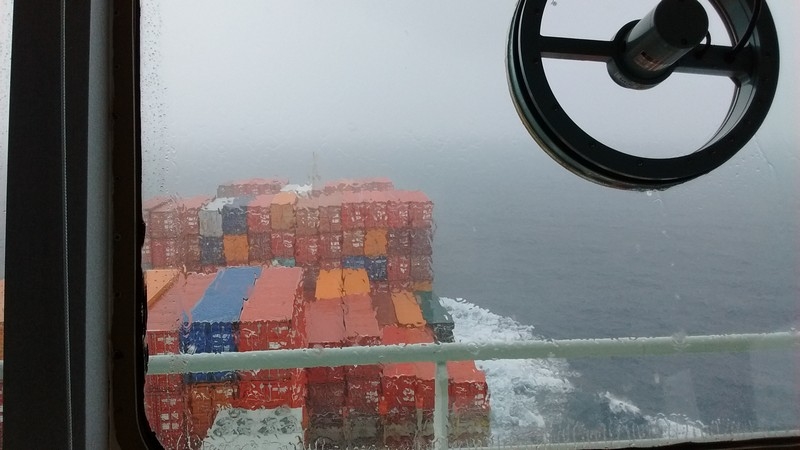 Let me back up a bit because it was day 5 of my 8 day cargo ship journey when we reached Cartagena, Colombia.

For the first three days of my trip all it did was rain and I could only roam around inside the ship.

So what was it like living aboard a cargo ship anyway?

My next encounter with the Captain and officers were later the first night during dinner. I ate at the Captain's table where he shared great stories about his sailing journeys. The Captain and crew were Filipino and the officers were Russian and Ukrainian. They were a great bunch who seemed to get along well and take their jobs very seriously.

During the trip I enjoyed delicious, freshly cooked meals three times a day but I admit getting up at 7:30am each morning for breakfast was a bit rough for me. I could have skipped it or ate something later but it was much nicer to eat with everyone else. All meals were included when I booked the trip so there was no worry about additional costs for food. The meals included dishes from the Philippines, Russia and the Ukraine. I was in heaven.

They do not accomodate special diets or allergies (I was informed about this prior to booking the trip) and I was just fine with that. As a matter of fact, on the first night they served salmon which I have always hated. However, I ate that salmon like it was my last meal on earth and it was delicious! Once, I arrived in South America, I would continue to eat and enjoy things I've hated my whole life... I was changing.

In the evenings, I was invited to hang out with the crew in the day room where they watched movies and sung karaoke. It was so much fun! I learned some crew members had 6 month contracts while some spent as many as 10 months at sea. That's a long time to be away from home and they were very happy to have someone new on board to break up the monotony.

For my 8 day stay aboard the cargo ship, I was assigned the 4th Engineer's cabin which is pretty spacious for one person. It has a bed, couch, closet, desk, refrigerator and a private bathroom with shower, toilet, sink, clothesline and medicine cabinet. The temperature inside the cabin was comfortable most of the time but if I got a little warm, I would just open the window. Also, the couch was a little more comfortable than the bed but since I spent a lot of time standing on it to take photos out of the window, I didn't sleep on it.

But I know what you're dying to know though...

You want to know about the internet.

There is no accessible internet aboard the ship. However, the Captain will create an email account for you that you can only check using the computer on the bridge. You can give this account to family and friends so they can keep in touch with you during your journey. There is also the possibility of having internet service while the ship is in port. The first night, I had a great internet connection via my cell phone while we were still docked at Port Everglades in Fort Lauderdale, Florida. That connection lasted until about 11:30pm as we sailed along the narrow shipping lane that night. Not having internet access for most of the trip may sound like a nightmare to many but it was heaven for me.

If  I were to have a snack attack (and I did), there was a store on board for things like candy, chips, liquor, special toiletries, sodas, bottled water, etc. To order goods from the store, I checked off the item and quantity on a little slip and put it in the pick up basket in the dining area. The items were then brought to my cabin (now that's service). I paid for them in cash at the end of my journey. 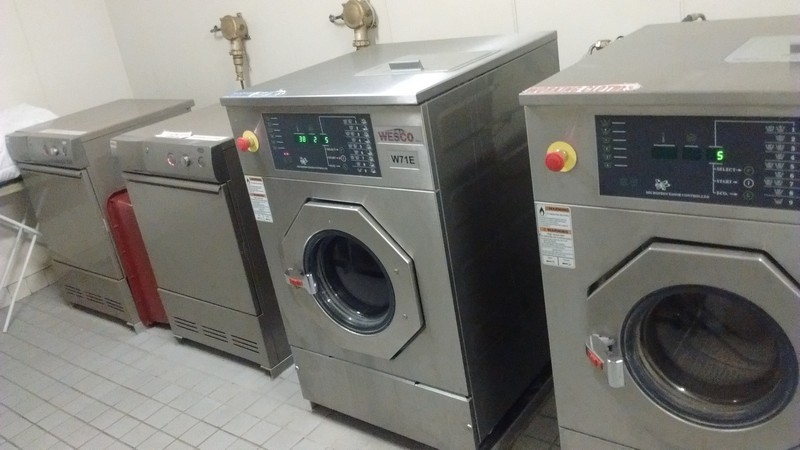 The other great thing about being aboard the cargo ship were the laundry facilities. I was able to wash all of my clothes for free while on board. It took a little careful timing to find an empty machine but it was all good when I did. Two of the machines were for work clothes only. Then there was one for the officers and one for the crew. I could use either one of those. 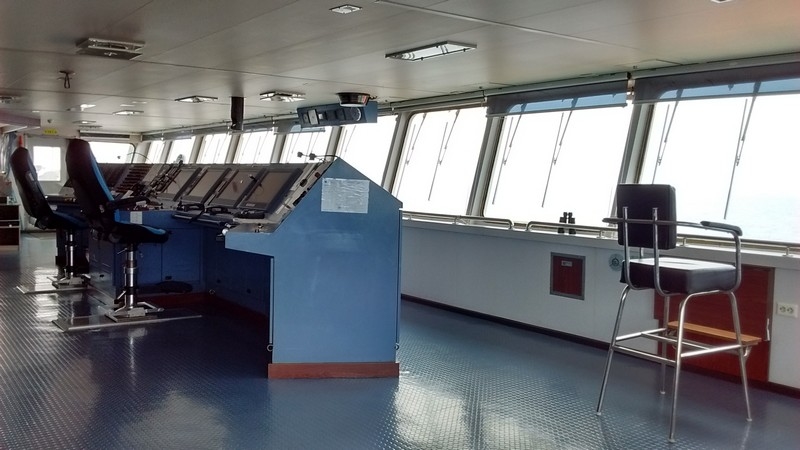 I was also allowed on the bridge any time, day or night and took advantage of the privilage whenever I could. On the bridge, I talked to the captain or sat in the tall chair near the front windows to watch the ship go in and out of storms or to just relax. It was a particularly special treat to be on the bridge when the Panamanian Captain and crew came on board to pilot the ship through the Panama Canal. So being on the bridge gave me a good view, a good chance to see what was going on and a good workout. 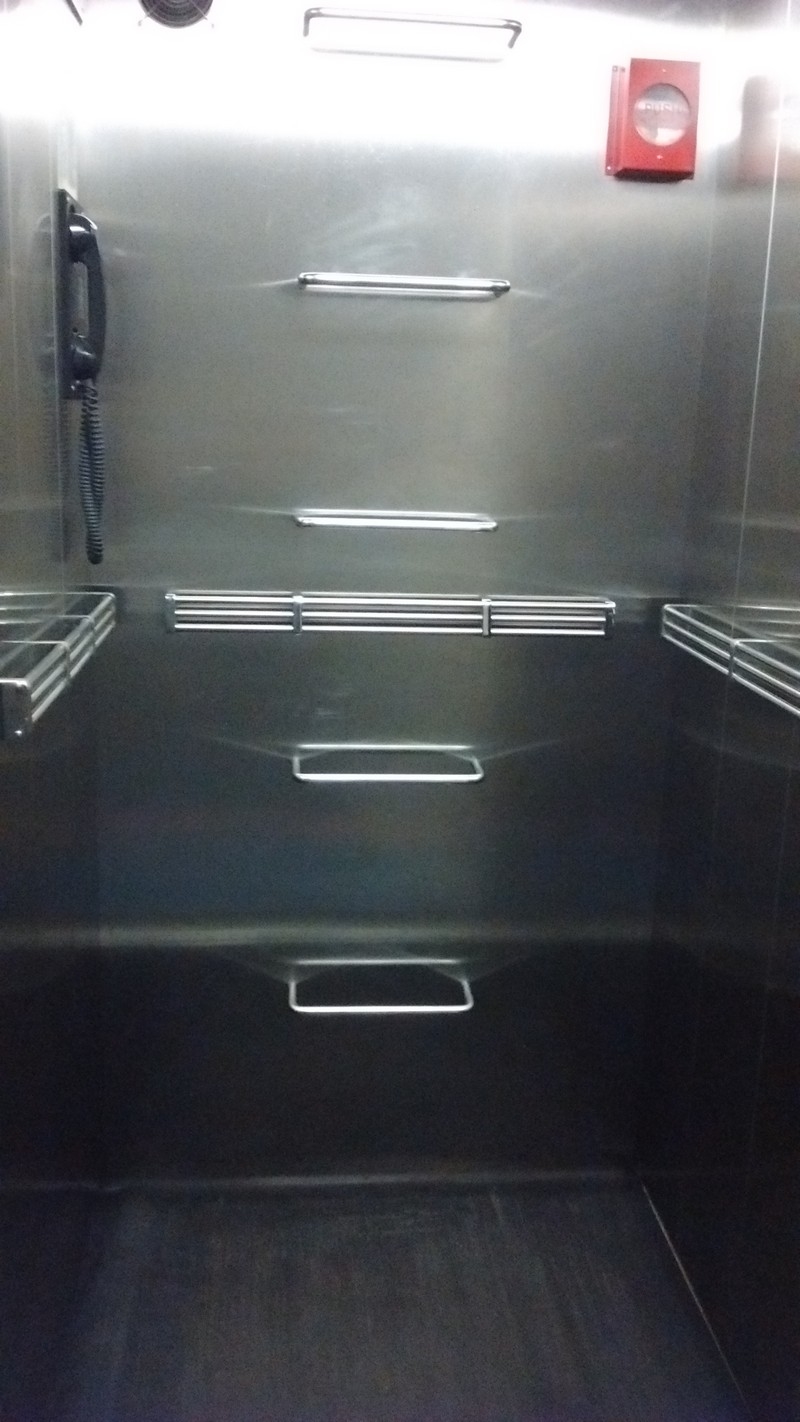 The elevator was not to be used when going less than 3 decks and while the bridge was 3 decks up from my cabin, the elevator only went up 2 decks from mine. The last deck to the bridge was walk-up only. So I walked it.

It blows my mind to think of the physical condition I was in when I boarded the ship almost three years ago. I was so sick and while I did realize I was not healthy, I don't think I truly realized how bad I was.  Things are so different now and I can look back and see things more clearly.

I was definitely in much better shape by the end of my cargo ship journey than I was when I first climbed the fun-house ladder to get on board.

Well, not really sick... I only had a hint of sea sickness the first night. I took Dramamine and it was gone pretty fast. The ship does rock very gently but most of the time I couldn't tell until I was lying in bed. I didn't have to take anything else for the rest of the trip.

One thing I didn't quite understand was that I was tired a lot on the ship. I experienced total body fatigue and sleepiness even though I felt I was getting enough sleep, especially with all the naps I felt compelled to take. It is possible that I felt tired because the food wasn't full of sugars, etc. We were fed a good variety of dishes but there wasn't much sugar involved. Drinks were mostly water and tea but no processed sugar, only honey was available. Whatever it was, I was fine by the end of the trip and felt wonderful when I reached my destination. 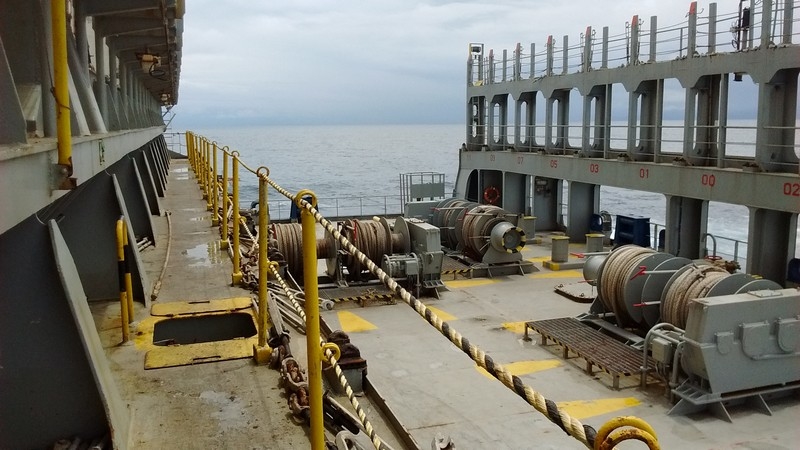 What a breathtaking sight! The breeze was soft and cool, the ocean an incredible blue, the sun a bright guiding light. I walked to the rear of the ship where the engine was loud and somewhat brutal to the ears. Walking to the front of the ship was very different. The only sound I could hear was the gentle sounds of the water as the ship sailed over it. 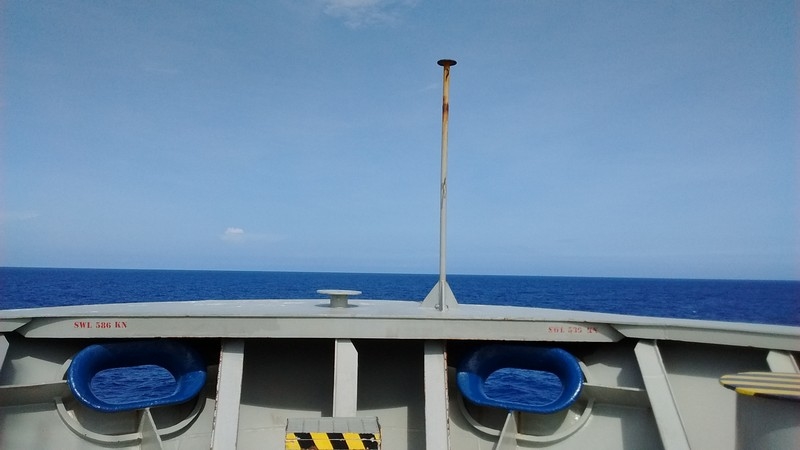 I sat for a long time in front of the ship, living in the moment; just like I'd planned. I didn't take any pictures or daydream about the meaning of life. I just sat there feeling the cool breeze blow over me while I listened to the sound of the ocean.

On the 5th day, we were in Cartegena Colombia. I was dying to get online but couldn't without a local SIM card. What would Joan Wilder do? She probably would have left the ship and gone on a scream-filled adventure in search of internet access... or a giant emerald. 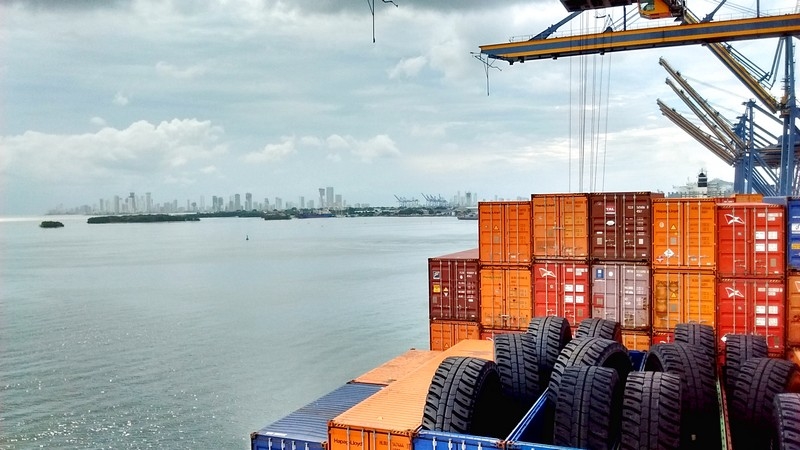 - Approaching the port in Cartegena, Colombia -

I could have left the ship... The Captain made me an ID so I could come and go from the port. But the fear of being left behind was too great. No matter how desperately I wanted to get online, I stayed on board. It was just as well. Although the day started off beautiful, it wasn't long before it was raining again and I would only gaze from afar upon what looked like a pretty modern city with more high-rise buildings than my native Tampa, FL. 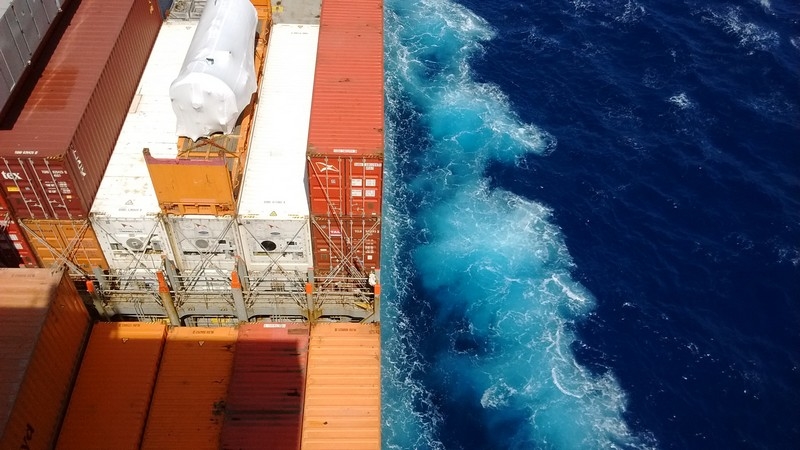 The morning after we set sail from Cartagena, I was back on deck. The sun was shinning once again and I took in the sight of the beautiful blue waters in front of us. The wind was so gentle and cool, I wanted to stay out there forever. I worried about nothing. I took a lot of photos that time.  However, the memories are still vivid in my mind to relive again and again ...

There was another cargo ship on the horizon. It was a beautiful sight.

The night before, I opened my window and stood staring out into the darkness. It was pitch black everywhere I looked. I wondered how people did this before modern ships. I couldn't imagine being on a wooden ship, no matter how large, with no electricity or fancy navigation tools sailing into the kind of blackness that is at sea. It's a black so black that it would be easy to think you were in a black hole heading nowhere, especially if you've been at sea for weeks or months.

I'd never seen such blackness. I couldn't even see the stars that night.

On the 6th night, I watched a movie with a few crew members. It was a familiar American movie dubbed in Tagalog with very very wrong English subtitles. I laughed so hard. It was a great way to end the day.

It would be two more days including a trip through the Panama Canal before I would reach my destination. I was ready.